La Cimbali’s Rob Ward is pleased to be back in Rimini, and Italy, the home of the Espresso coffee! 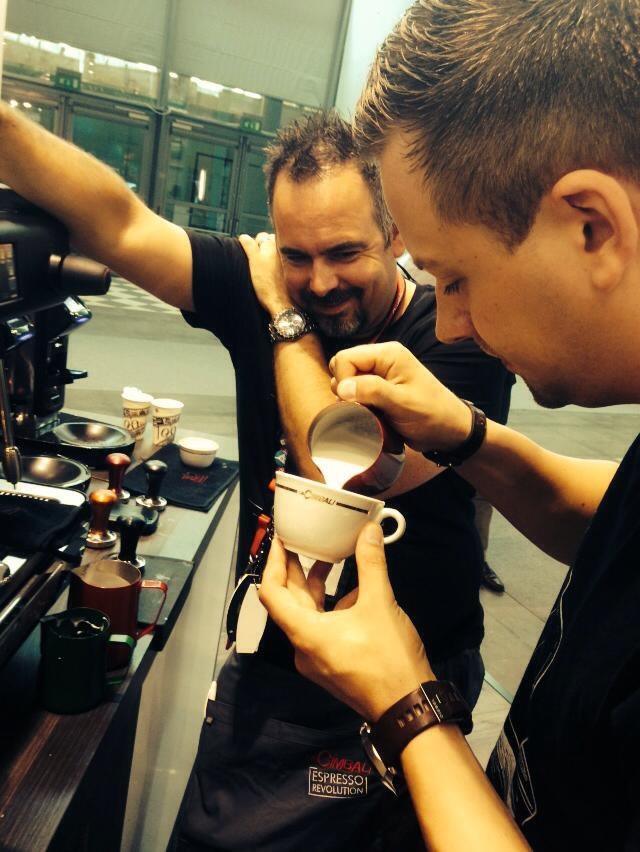 It was great to be back in Rimini at the Speciality Coffee Association of Europe (SCAE). In previous years it had been held in Nice, Vienna, and Maastricht, all at great venues with different appeals. I wondered….. what would the home of Espresso hold for the coffee hungry explorer looking to further knowledge and involvement in the ever growing and changing coffee culture around the world?

My last memories of Rimini were as part of a 4-day 2,600-mile road trip of Europe to collect 2 classic La Cimbali machines for the London Coffee Festival back in 2012 (the ramblings and delirium of the trip are captured on YouTube). On that trip we arrived late into Rimini at around 9-10pm and headed straight into a local bar to get some pizza and sleep. In the morning the sky was grey and it was cold and raining (reminding me of home in the UK). As I arrive at Rimini train station this time, it is around 8pm in the evening, around 23°C and the sky is clear blue, a welcome change from the previous visit.

I arrived a few days before the event, to take part in some coffee machine testing and to also help with the set-up for the show. As the days get closer to the start of the exhibition, the buzz is starting to grow, not surprisingly as this year some of the world coffee event competition finals are being held here including; Brewers Cup, Coffee Roasting, Ibrik and the event so many people came to see The World Barista Championships!

After my recent visit to SCAA in Seattle I did have a slight leaning towards Laila Ghambari from the US who I had seen compete and take the US barista title. Her signature drink reminded me of the trend of ‘Nose to Tail’ eating that has come back in strength to the UK foodie scene, using every part of the coffee plant to produce the drink. There was syrup from the cherries, smoke from the wood of the plant and of course, coffee from the beans locked inside.

Obviously I was intrigued to keep my eye on Maxwell Colonna-Dashwood from the UK and his ‘science of water’ and coffee presentation. Maxwell went on to compete in the final 6, although much to my dismay Laila missed the cut with a really strong field in the final 6 from Japan, Hong Kong , Greece, Australia, UK, and El Salvador, all with their own twist on Espresso, Cappuccino, and signature drinks.

The contrast between conversation on traditional Italian Espresso, third wave style Espresso and different brew methods is always interesting. Plus, as part of the *Mumac Academy, nestled in-between the Faema and La Cimbali stands you could experience some great syphon, and cold drip coffee offerings as well as single origin Espresso from Costa Rica, Ethiopia, and Barbarella II, which was developed initially for the London Coffee Festival 2014.