Research shows that coffee, tea and wine can help boost the diversity of gut bacteria 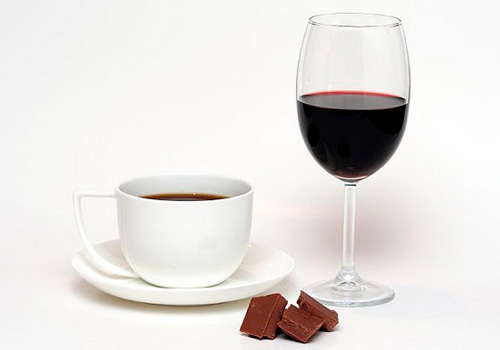 A new study has revealed that drinking coffee, tea and wine can help boost the diversity of gut bacteria which leads to better long-term health.

Indulging in the odd glass of wine, mug of tea or cup of espresso providing a daily caffeine fix has often made the health conscious people among us wracked with guilt! But now it would seem that what we eat and drink on a daily basis can in fact affect the trillions of bacteria in our gut, with the good fighting the bad and the ugly!

These days many of us have discarded our favourite alcoholic tipples, coffee shots and milky cuppas from our diet in favour of vitamin drinks and shakes, or nothing but water. However, the recent research that has been undertaken by the Dutch reveals that all three of these beverages help maintain vital good bacteria in the gut. This colony consists of good bacteria which are thought to have anti-inflammatory effects, and bad counterparts that promote inflammation. A healthy body ideally needs to have a balance of good and bad bacteria to run at its best.

The study which involved 165,000 residents from the northern Netherlands* discovered that people, who as well as consuming tea, coffee and wine regularly, also showed the benefits that eating yogurt and drinking buttermilk can have on the health of the gut too. But whole milk and high-calorie diets were shown to compromise these effects.

This research was unusual compared to other similar studies because in addition to the analysis of diet questionnaires and medicine prescriptions, the scientists also dissected gut DNA from frozen stools too. This meant that they were able to gain much more detailed information about the different bacteria types and the factors that impact the diversity.

*The research focused on normal people rather than those with illnesses as part of the LifeLines programme which monitors the health of 165,000 residents of the Northern Netherlands.